Dame Zandra Rhodes, famous for her fashion. A trend setter and designer for the rich and famous.

She opened the London Fashion and Textile Musuem.

IKEA is a client of mine as I was asked to go photograph the Dame Zandra in her home, the penthouse above the museum. What a pad! So creative and ‘out there’. A marvell.

On entering she greated us with open arms. Such a lovely lady.

Zandra once designed dresses for Princess Diana and stage outfits for Freddie Mercury.

She has a wonderful way of reliving her experiences and has many stories to tell.

It was my task to photograph Zandra Rhodes in her London home with IKEA as they are running a collaboration with her in the summer. So be on the look out for some crazy designs to brighten your homes with. She’s a big fan of the Swedish brand, and is an avid space saver.

Dame Zandra Rhodes, 78, is one of Britain’s most sought-after fashion designers, also she is a teacher at Medway College of Art, now the University for the Creative Arts.

Born in Chatham, Kent a young Zandra was introduced to the world of fashion by her mother, who was a fitter in a Paris fashion house.

She studied at Medway, before the Royal College of Art in London and focused mainly on printed textile design.

The Brit was one of the few designers in London, who made the capital one of the leading cities on the international fashion circuit in the ‘70s.

Here’s a peice on her: Zandra Rhodes

The British designer has worked with a number of famous faces but one of her most elite clients has to be Princess Diana.

To this day, she continues to design for royalty and celebrities, having worked with Elizabeth Taylor and the band Queen.

She designed notable costumes for Freddie Mercury and Brian May of Queen, as well as Luke Spiller of The Struts.

Dame Zandra collaborated with Marks and Spencers to create an upmarket collection, as well as a jewellery range.

Zandra is mostly famous for being one of Britons most sought after fashion designers.

But she is also known for her eccentric personal style, which often consists of flamboyant clothes and bright coloured hair.

Most will know her as one of the women who created timeless pieces for Princess Diana, while others will remember she designed for Freddie Mercury.

Nowadays, she is known for teaching about fashion, as much as she is for contributing to the industry.

Yes! The fashion legend is one of 20 celebrities, who signed up to appear on the 14th Series of Master Chef: Master Chef

She is starring in the latest series alongside stars including TOWIE’s Joey Essex, Strictly’s Oti Mabuse and Love Island’s Dr Alex George, among others.

When the contestants were tasked with making a meal for the staff at London Zoo earlier in the series she was paired with Oti.

The teams were each given three hours to make 60 main meals (30 meaty and 30 vegetarian) as well as a dessert.

Anyhow, here are a couple of my images that we created for her. 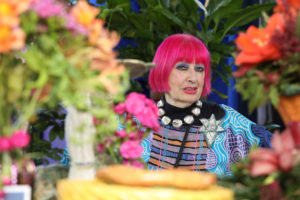