New Year Wedding at The Barn

This was my first wedding of 2022, which took place @TheBarn. An award winning venue, it was very beautiful. Set in the heart of Royal Tunbridge Wells, with it’s own little private courtyard.

It was touch and go for some time throughout the Christmas period leading up to new year. Abby & Stu were on tender hooks, as the Prime Minister laid out the restrictions for large group gatherings and what would be allowed regarding the pandemic. With the new Covid variant nobody could predict the new year. I think it’s fair to say, not even Omnicom couldn’t stop them!

So the day began a little damp and the theme was set for the day so it seemed, with light drizzle forcast for the entire day. Hey, it’s January after all, and the UK is always a little unpredicable for it’s weather.

This wasn’t going to slow these two down.

Stu and the groomsman waited at the venue for Abby’s arrival. She was going to keep the groom waiting! Best things come to those who wait Stu.

I’ve known the groom for a number of years, we worked together as students at a local hotel, he’s one of those chaps that will get on with anyone. He’s a true gem. Confident, positive, chirpy and friendly. But he was nervous. Abby was keeping him waiting, and Stu has one of those sayings, ‘Skip to the end’.  Stu was keeping this saying buried until the speechaes when his father used it in the Best man speech, it was so funny.

Abby arrived with her bridesmaids in a lovely vintage white Rolls Royce. With a beautiful, long, lacy white dress she was eager to get down the aisle to see her fiancé.

This couple clearly have deep roots, they are a natural match. They have a great relationship where not only do they love each other but they are best mates. It’s clear to see.

The ceremony went without hitch, and everyone was having a giggle to the registrars funny comments.

A Bucks fizz  drinks reception followed and the guests enjoyed a few at the bar.

We had a dry 5 minutes so I helped usher the wedding outside for a great big group shot. I love doing these images but they can take a while.

The breakfast room was laid and ready, with a rustic barn feel and wooden beams and a touch of modern design it was beautiful. The cake was stunning, it stood tall and proud. Table details consisted of the couples favourite movies, popcorn was added as a wedding favour and it looked amazing. A real unique touch, it just worked.

This is when the party began, the DJ had the music on and people were dancing. Again we had another 5 minutes of dry weather so we took advantage and the Bride and Groom nipped outside for one final photo. I don’t normally do too many staged photos, but this was a request by the couple. It was a dark photo with off camera flash. With a groomsman helping by holding a flash high above the couple, we snapped the below with the christmas fairy lights and then got back to the party.

First dance followed and then everyone was singing and dancing the night away. Almost felt bad to leave, it was that good!

I wish Abby and Stu all the very best in their new married life together, they are a lovely couple. 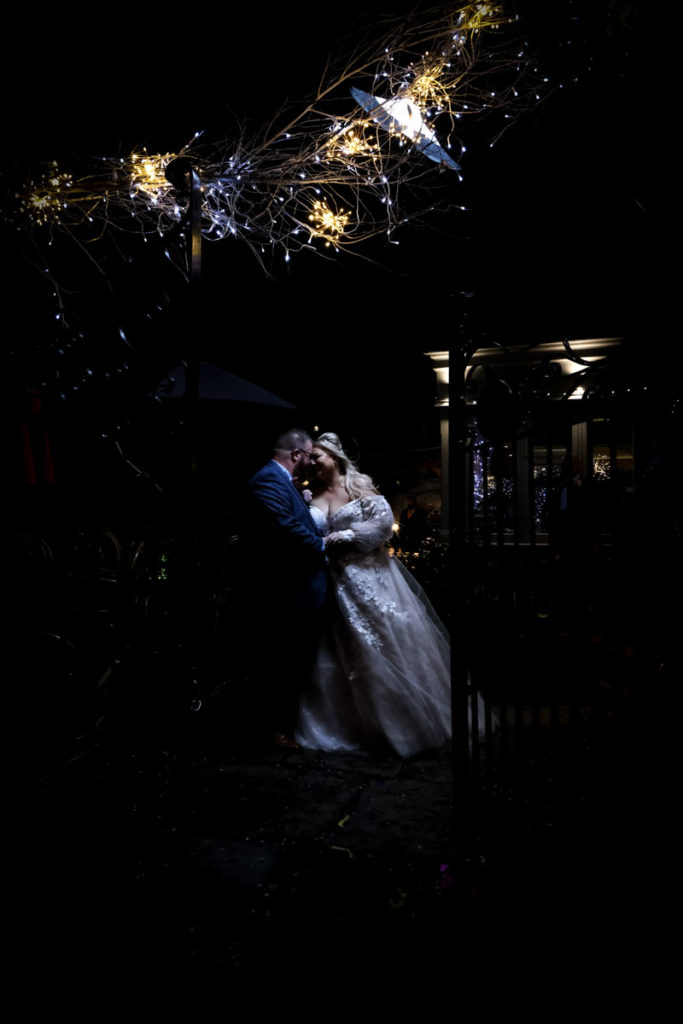