Latvian artist Germans Ermičs has creates a Rainbow glass cabin for Instagram bringing social network’s colourful gradient to life. The glass cabin is a collaboration between the two at this years Cannes Lions 2019 festival of creativity. 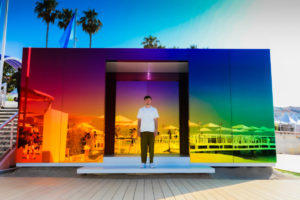 Reconstructed in Cannes on the beach outside the Majestic Hotel, the 50sqm structure marks the first time ermičs has worked at this scale. The designer is known for his work with colored glass which uses a similar gradient style with strong pigments that fade to clear. Creating furniture, tables, plinths, tanks and mirrors from the same mediums. 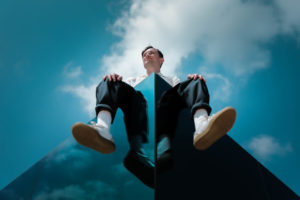 ‘Where the Rainbow Ends’ – (the title of the work) – Ermičs has replicated this gradient effect with 360-degree perspective, allowing visitors to travel to the ‘End of the Rainbow’. 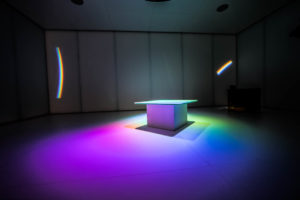 Inside the cabin you can find light effects by london based urban electric project rainbows bouncing around the room. Spectrums of reflected lights beam onto the walls and floors., hosting a white table at its center. The designer’s ombre glass chair sits tucked into the far corner. The lights move to the track of french production duo domenique dumont. 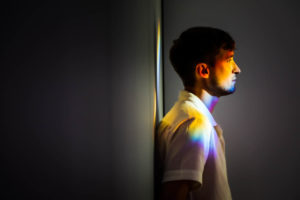 When questioning Ermičs regarding the commission, the idea was to inject the Amsterdam based artist signature look into the glass bain and thus creating the gradiant rainbow effect. 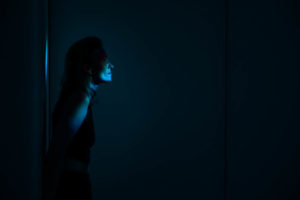 The giant commission demonstrates how white light seperated using prisms forms a rainbow effect. Ermics: ‘inside, music inspired by tibetan bowls unfolds from a single sine wave to a full sonic spectrum as you see and hear the sound of colored light.’ 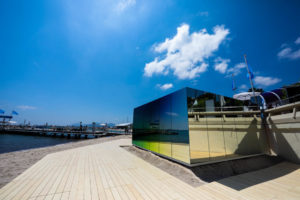 The installation also intends to celebrate International Pride 2019, whilst reflecting instagram’s support of diverse cultures. Commemorating the 50th anniversary of the stonewall rebellion.